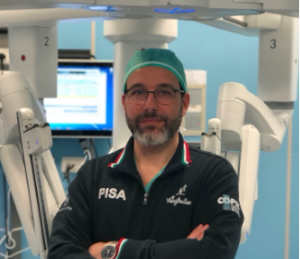 Tommaso Simoncini is Professor of Obstetrics and Gynecology at the Department of Clinical and Experimental Medicine of the University of Pisa and Head of the OB/GYN Division. TS is the Scientific Director of the Molecular and Cellular Gynecological Endocrinology Laboratory (MCGEL), an International center of excellence performing studies on molecular mechanisms of actions of sex hormones on vascular cells, cancer cells and brain cells, that are relevant to the diagnosis, prevention and treatment of cardiovascular disease, cancer metastasis and brain degenerative disorders. TS also performs clinical research, particularly on the effect of steroidal drugs on endometriosis, on the role of the feto-placental nitric oxide system in fetal growth restriction or on preterm birth, on surgical techniques in pelvic floor diseases, on computer-assisted pre-surgical simulation of pelvic procedures, on innovative robotic surgical approaches to benign and malignant gynecological diseases.

TS has published over 300 original papers on high-impact scientific Journal, with a global IF of over 750 and an H index of 48. TS’s publications have been cited more than 10.000 times.

From a clinical standpoint, TS has extensively dedicated himself to the surgical aspects of obstetrics and gynecology, with a particular interest in pelvic floor reconstructive surgery and to mini-invasive laparoscopic and robotic techniques in gynecology, urogynecology and gynecologic oncology. He has performed more than 10.000 complex surgical procedures and he is a pioneer in the application of robotic surgery to pelvic floor reconstruction. TS coordinates an internationally-renowned multidisciplinary center for the treatment of pelvic floor diseases. TS has a long-standing interest for gynecological endocrinology and climacteric medicine.